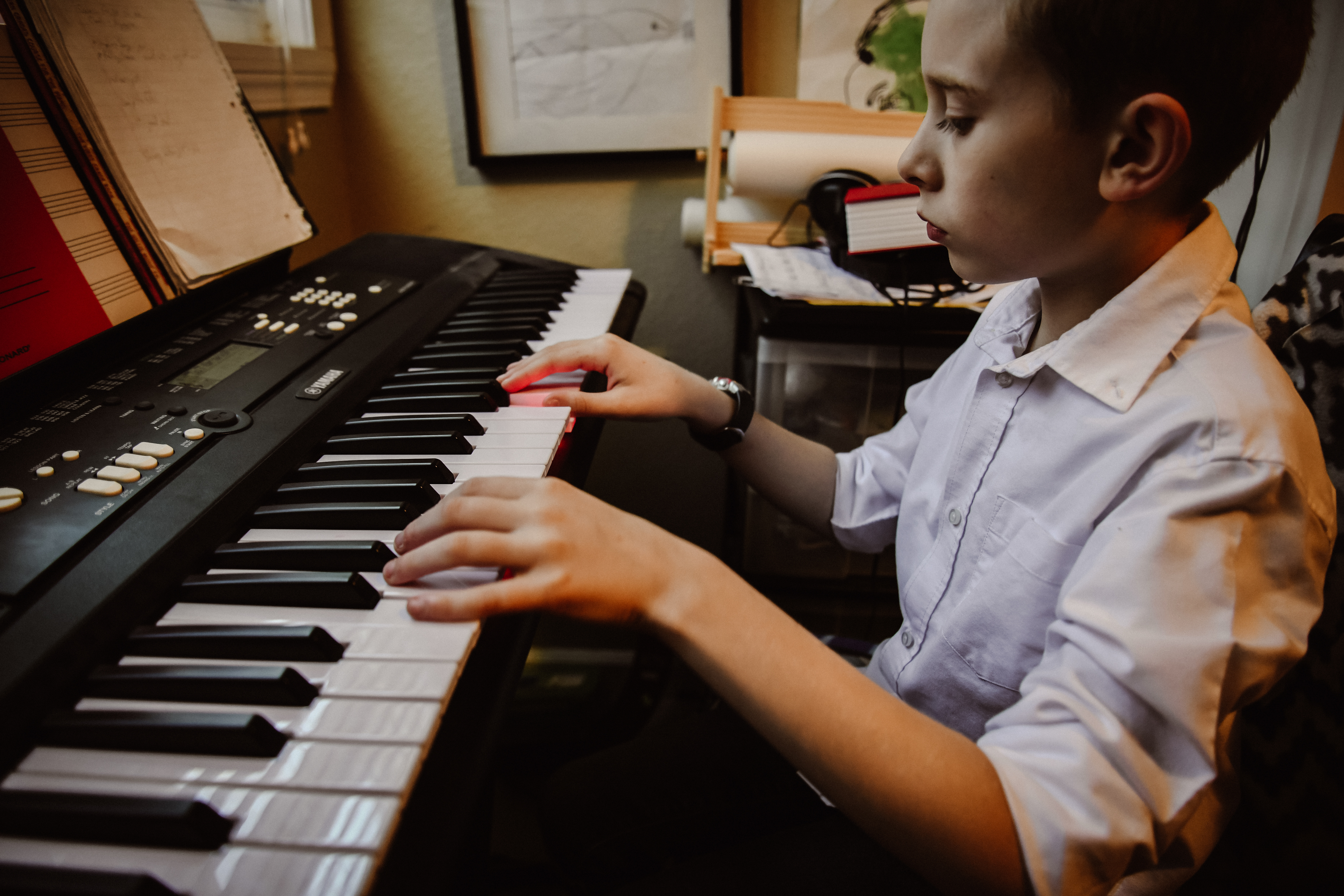 We all like to brag about our kids. We all like to post about their milestones and accomplishments. I know I just love seeing posts about my friend’s children succeeding, excelling, and winning at life. These years are the fun years. I get to have conversations with my boys. I’m watching their personalities develop further as they blossom into miniature adult personalities. Their humor and talents are becoming more refined. I’m slowly accepting and realizing that they aren’t my little boys anymore, they are becoming young men, young men with their own faults, their own dispositions and their own lessons to learn.

My children are almost complete opposites. Connor is the tight ass, the control freak, the worrier. He’s the first one out the door in the morning to catch the bus. He likes a schedule. He likes order. His room is always mostly clean. His homework is finished before he gets home from school. He likes to be prepared and ready. Connor likes to win, he likes to succeed and he works hard for what he achieves. Colton is as far opposite as can be, think chaos, free spirit, I’ll get there when I get there. Colton has no worries, not a care in the world… until he can’t find his book, his homework needs finished as the bus is pulling up in the morning, and CRAP, he forgot to practice his piano for the talent show! This kid has talent, he has brains, he is a natural, but he is as disorganized as the dollar bin at your local thrift store. Colton has personality, he has attitude and he has confidence. 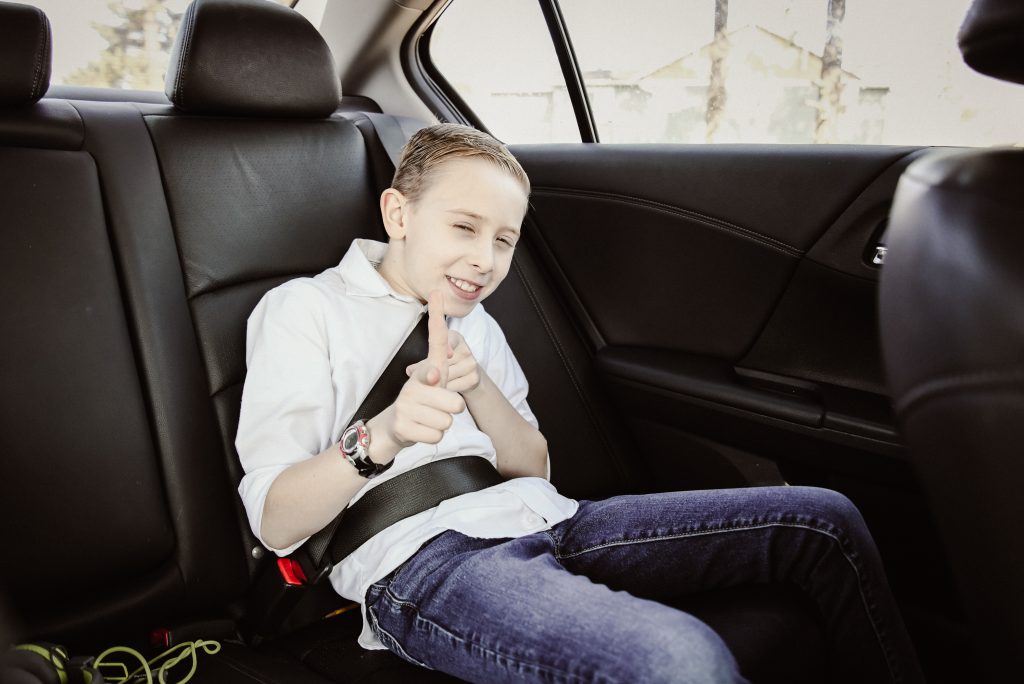 If I could just combine these two kids together they would be the perfect child. Colton would Bring to the table his talents and abilities paired with Connor’s desire for structure, organization and preparedness. This mashup child would be unstoppable. Now, I’m not saying my kids aren’t unstoppable, they are LEARNING to be unstoppable. 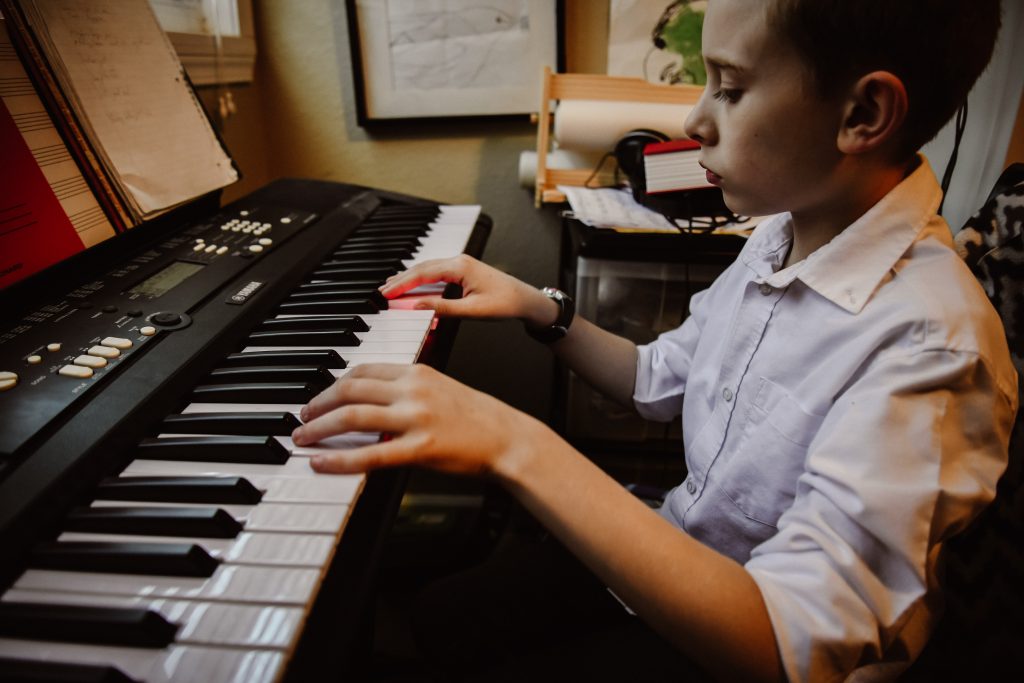 Colton takes piano lessons weekly. I honestly feel that between YouTube and what natural ability he has when it comes to music and rhythm, that he could teach himself to play anything. Colton decided to try out for Whidbey Has Talent. Auditions were on a Saturday. He wanted to play a new popular song and had fiddled with it somewhat, learning the beginning but never the whole song. His piano teacher suggested playing one he already had learned and so they settled on a Star Wars song “Duel of the Fates”. He practiced about normal, always bouncing from one song to another and then back to what he was doing. One week before auditions he changed his mind and taught himself the Mario Brothers Nintendo theme song. The song is fun, upbeat, and he enjoyed playing it. I thought ok, this will be more catchy and fun for the audience, so yes go for it. 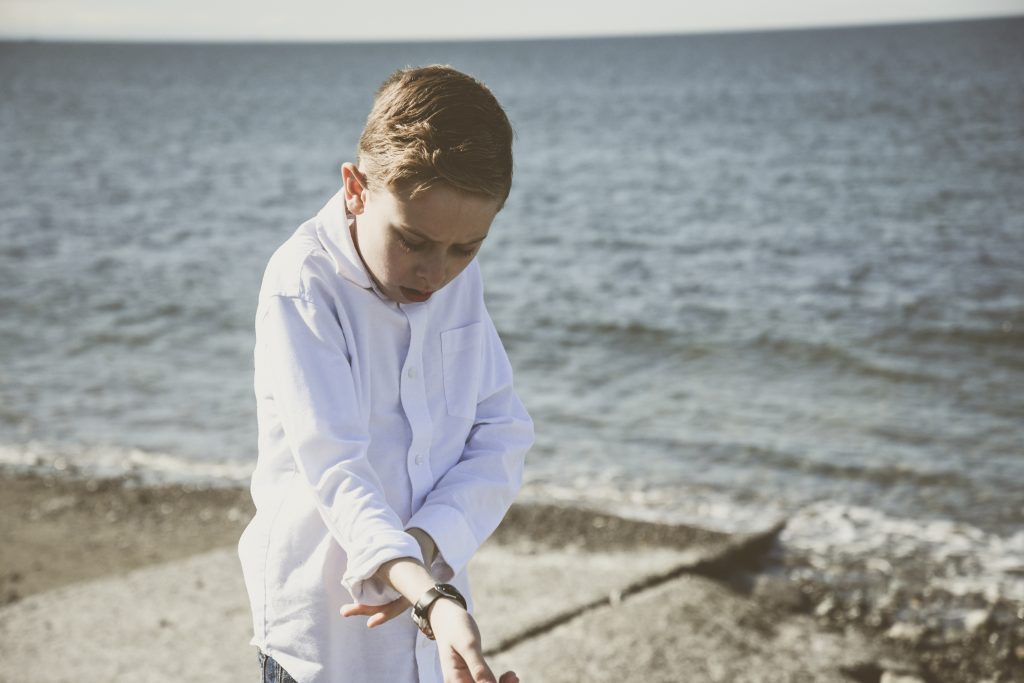 As audition day crept closer he stressed out, big time. We all know that stress can affect us differently and sometimes come out sideways. As adults we deal with it by exercising, drinking, long baths, or screaming at our significant other. Children aren’t familiar with identifying stress and how to deal with it. 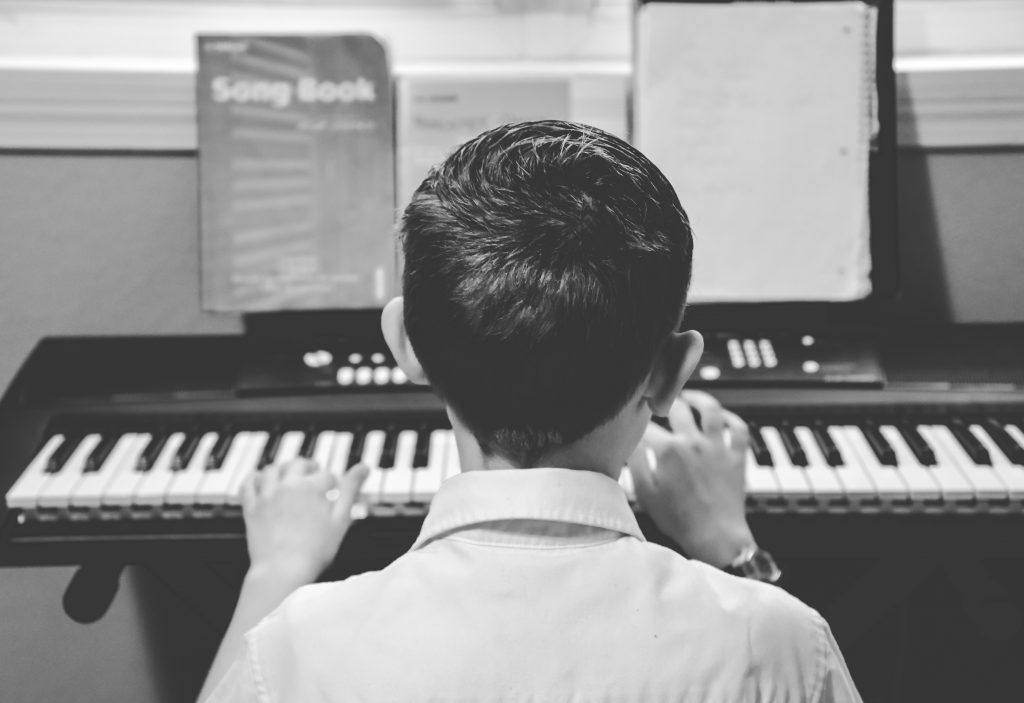 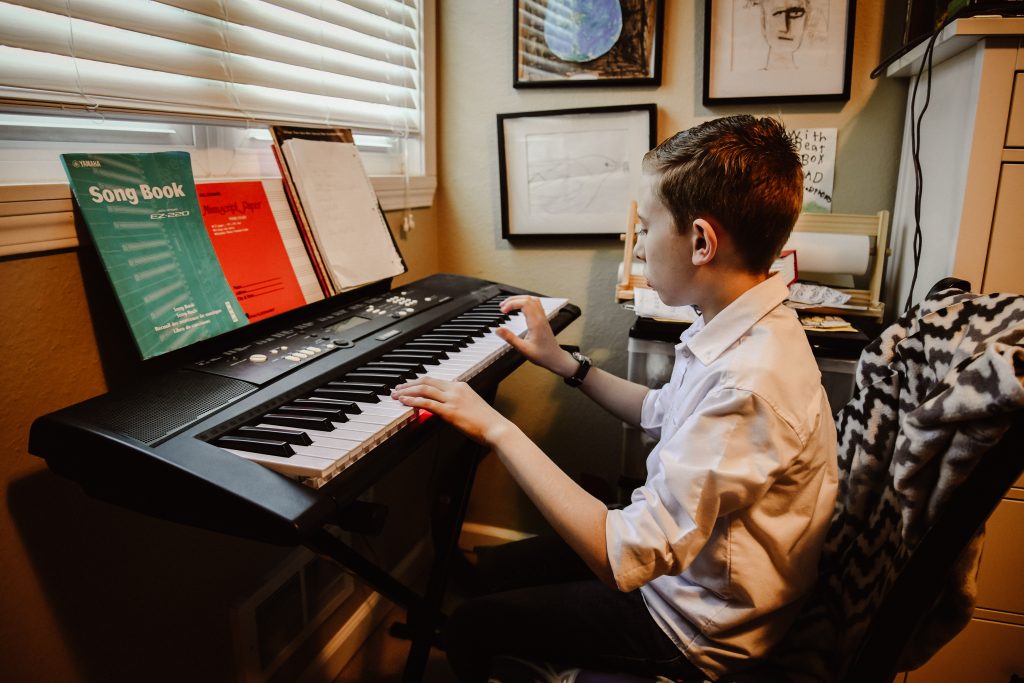 He began to realize he was under prepared, he didn’t know what to expect and his nerves were getting the better of him. As a mom you want to protect your child and take away the stress factors and ensure him he will be ok. Watching his turmoil and angst was the hardest thing I’ve had to watch him go through to date. I wanted to tell him it was ok, he didn’t have to do it, but I also wanted him to learn a lesson. A hard lesson.  He needed to learn that you have to put forethought into things. You have to set yourself up for success. Sometimes to learn this lesson you must fail a time or two.

Audition Saturday arrived and we walked into the Whidbey Playhouse. His palms were sweating. He was so nervous his voice cracked when he told the volunteer his name. He tried to give a nice smile for the photographer but it was forced and you could see the tension on his face. He was  so nervous yet so brave. It killed me to watch him go through this, but at the same time I was filled with joy watching him face his fears. 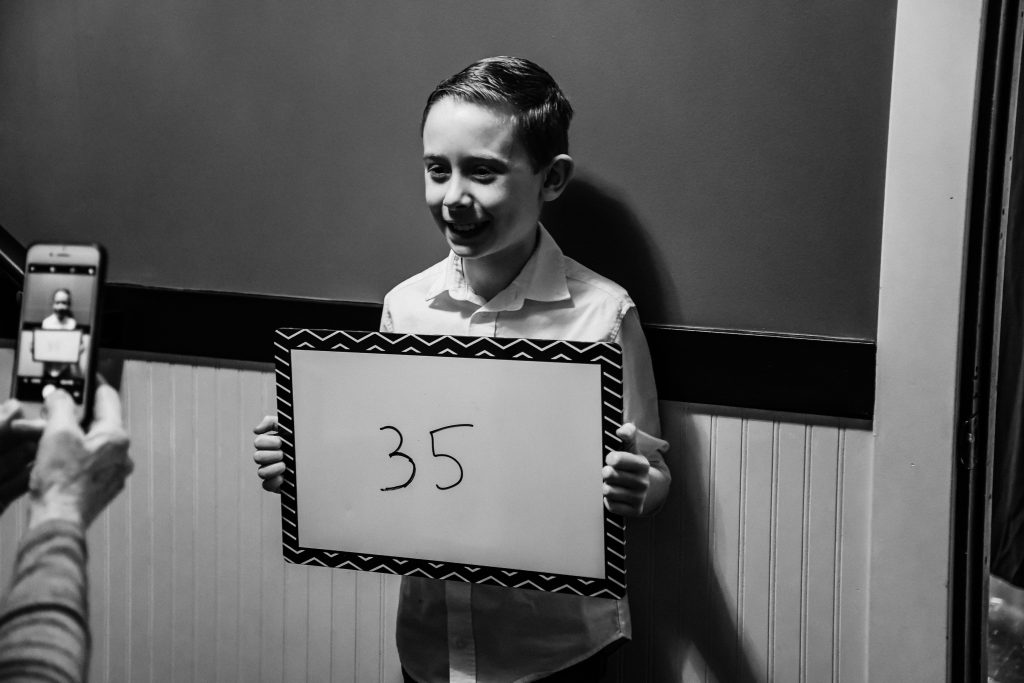 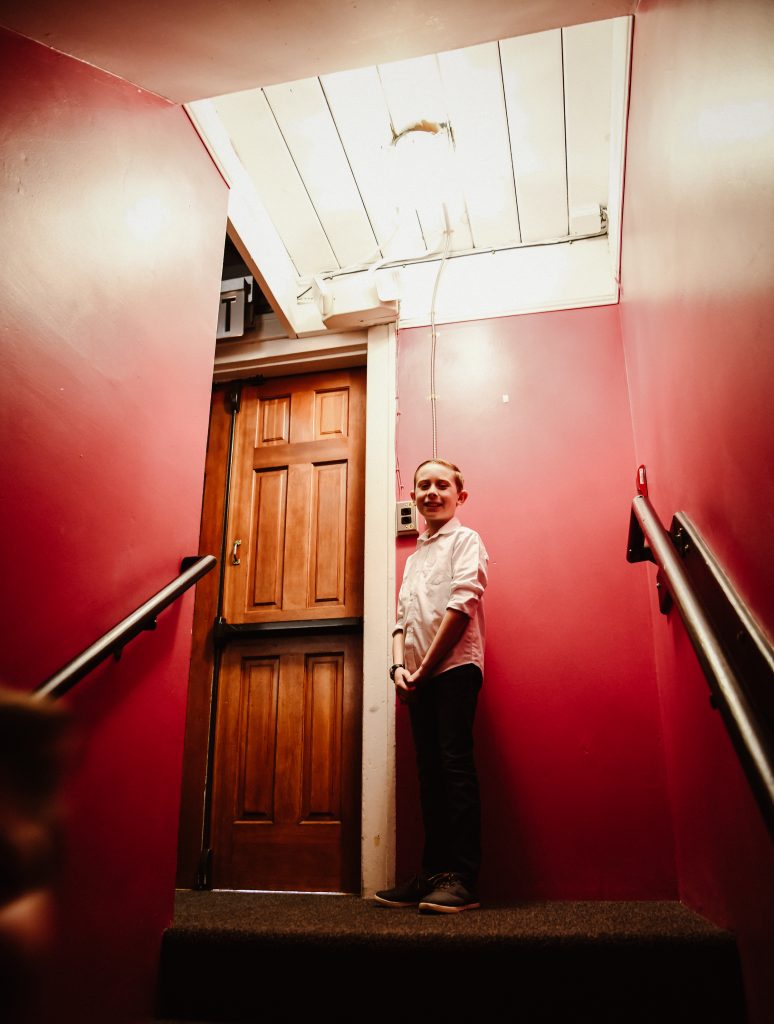 Showtime comes and he is in an unfamiliar environment. He doesn’t know what’s expected of him. He is far under prepared and he knows it. I was so proud watching him walk into the audition room and go up on stage, not knowing what was to happen. He just marched forward. 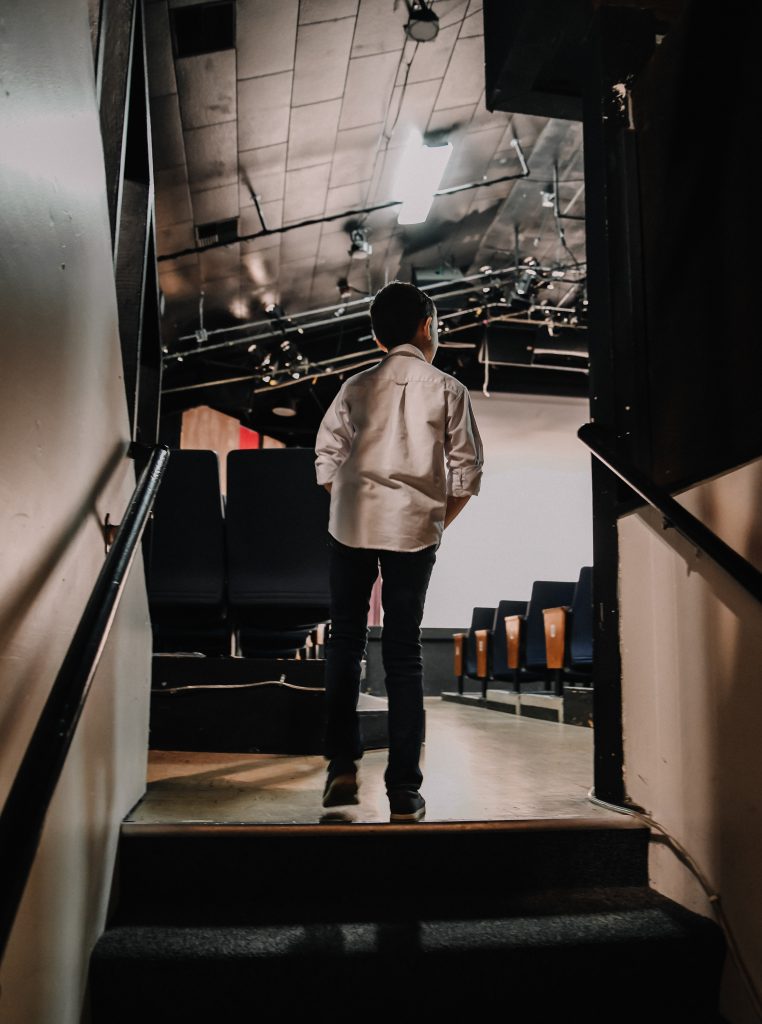 Here’s where the growing pain happens. Watching him squirm, and feel the pressure was hard. He got up on stage in front of three judges. He introduced himself and then sat down at the unfamiliar keyboard. He fumbled with the keys a little bit and was surprised at how different the strange keyboard sounded. He started off just fine, concentrating on the keys and what he had taught himself, then he got tripped up and stopped. He restarted the entire song and this time was even more nervous. I felt as if he would burst into tears any moment. I sat there and watched praying he would get through this without too many visits to a therapist. He was learning the hard way that he hadn’t prepared and practiced enough. 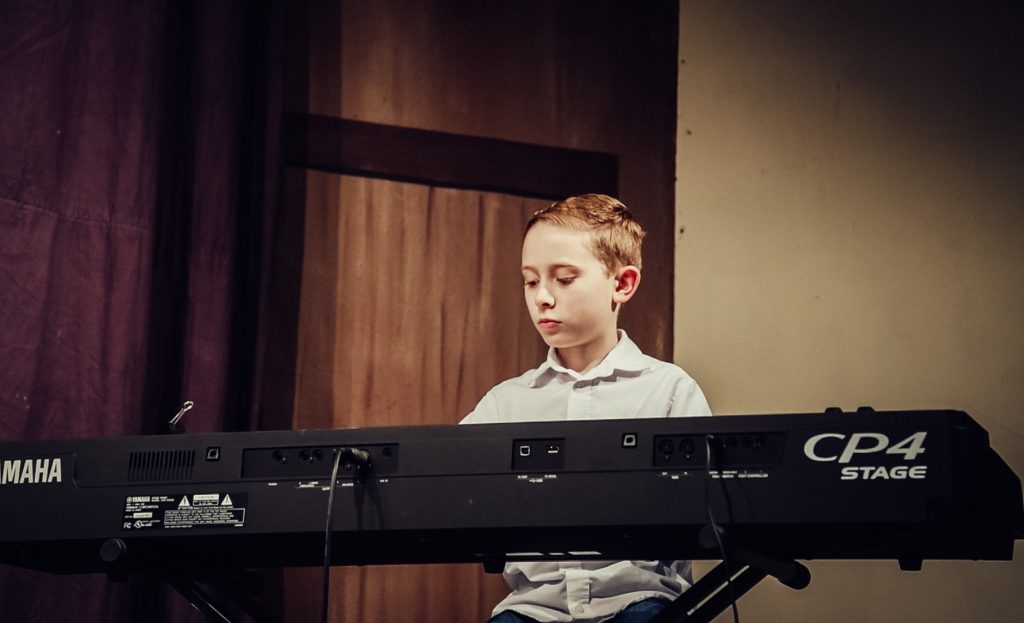 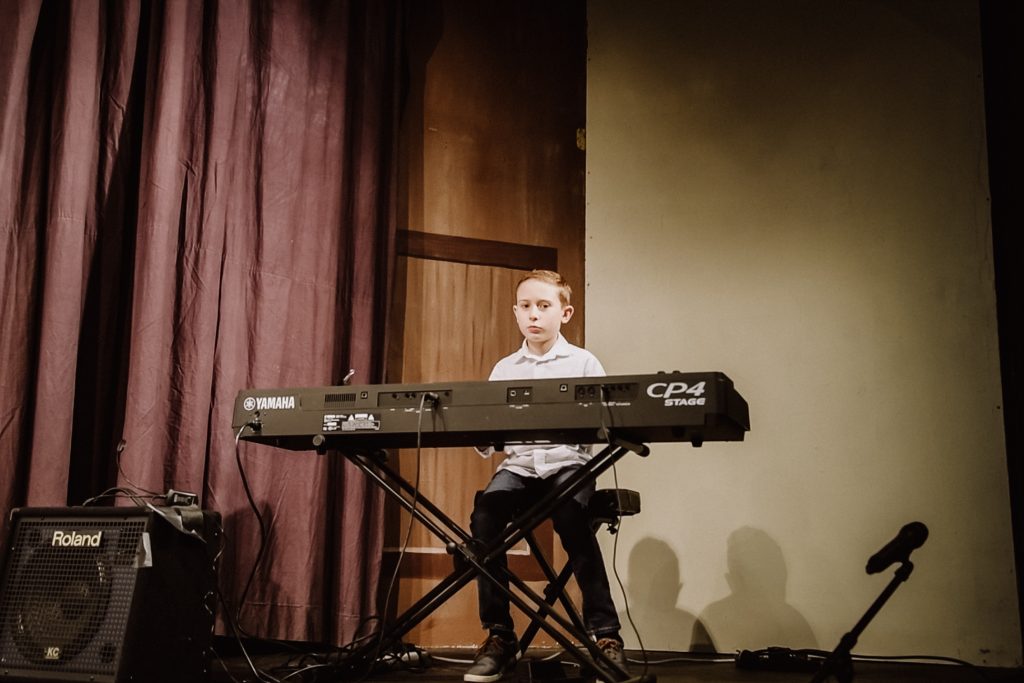 When he was finished with his performance, he stood up and took a bow. The judges had him walk to the center of the stage and there they gave him some advice, pointers, and constructive criticism. It was then I realized that he was completely vulnerable and mentally unprepared for this portion of the audition. I was so proud of him for even getting on stage, even filling out the paperwork weeks ago to sign up for this! That wasn’t the hard part, the hard part was doing it. He stood there politely listening carefully to what each judge had to say. I could see he was fighting back tears as they told him how to improve his stage presence next time and as they told him to smile more as he performed. He was courteous and responded properly to their questions and he said thank you when they complimented him. I was surprised at how tough he was. I was proud of his attitude and responses to the judges. But I could see in his body language and in his eyes that he was about to cry. 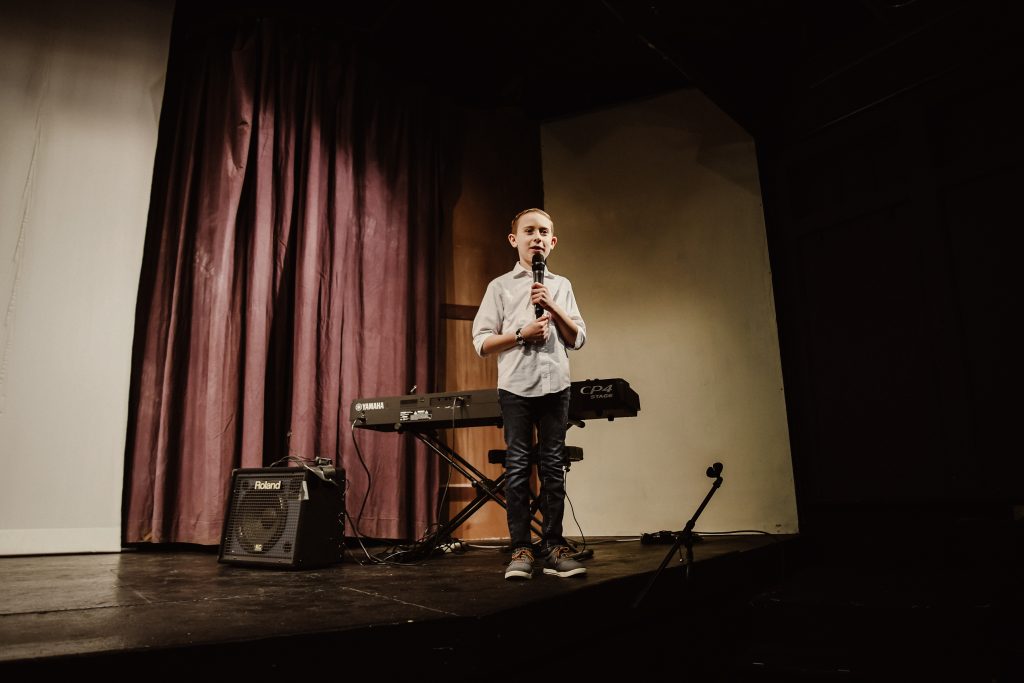 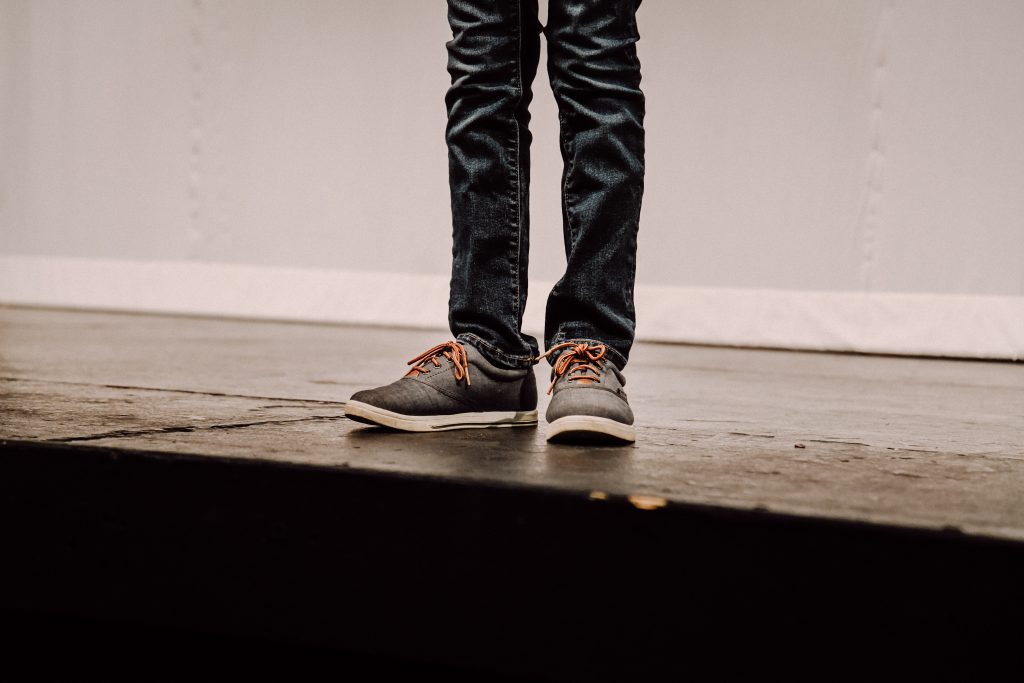 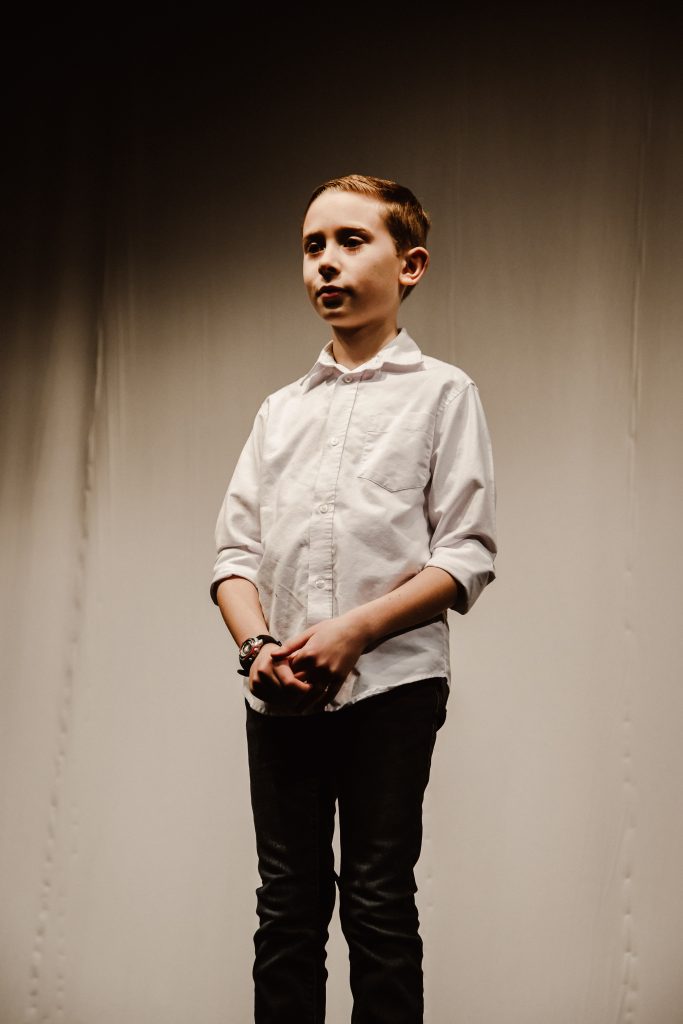 As we finished up and left the building his whole demeanor melted. He fell into the back seat of the car and began to cry. “I failed, I failed” he said over and over again. “I didn’t do good, they won’t let me in”.  I know this moment was devastating for him and it was hard to watch him go through these emotions and feelings of failure, but this was a growing and learning moment. I told him all he can do is learn from this and do better next time. Listen to the advice the judges gave him and act on those pointers. He was too upset to listen to me. He just kept weeping and feeling the pain of knowing he failed, knowing he didn’t do his best, knowing he wasn’t prepared. We all mess up and we all make mistakes, but it’s what you do with those lessons that counts.  In the end I was so proud of him for attempting at all to play in front of an audience on stage and to put himself out there to be judged. 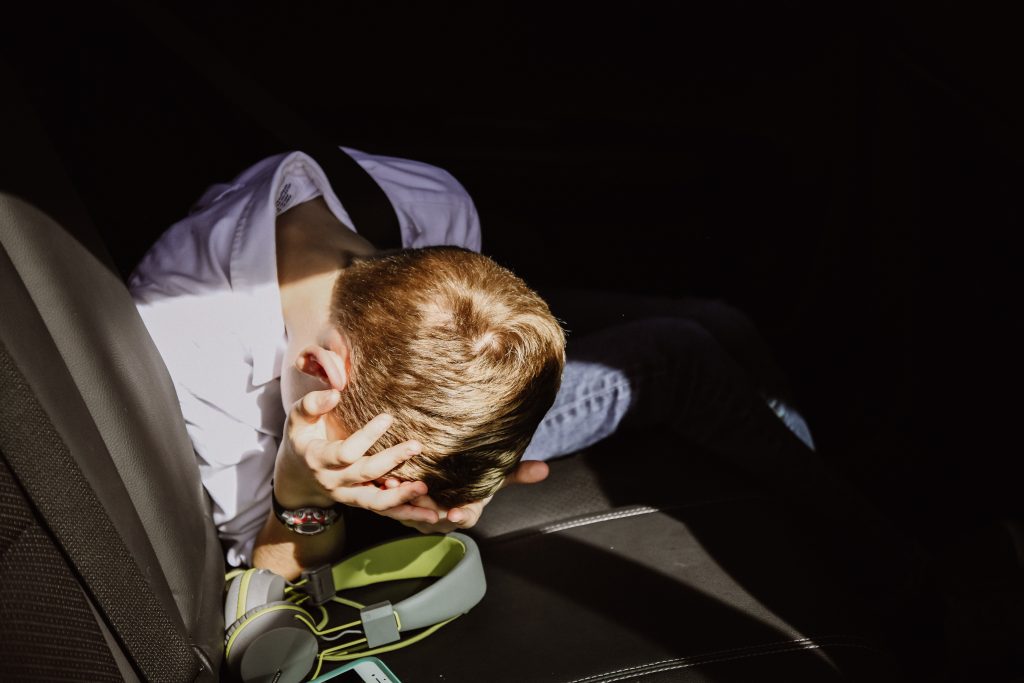 Needless to say, he made it into the talent show after all! The judges did see enough talent in him and understand things like stage jitters and first-timers. They did like him, they really did! 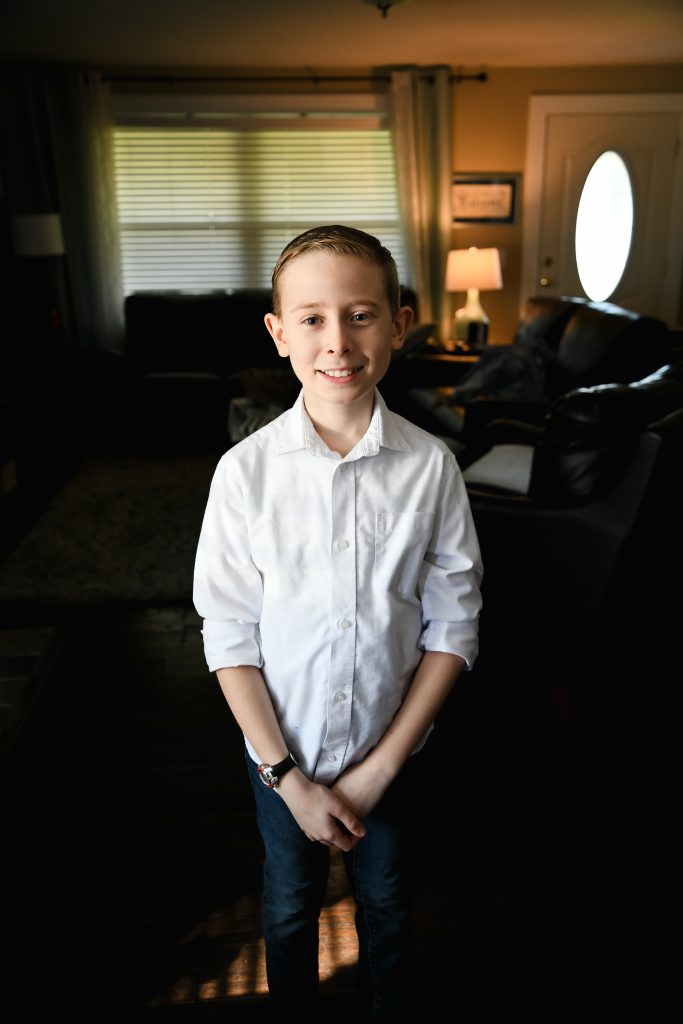 Now Colton is practicing his piano and mentally preparing for the real deal, the talent show in April. I have no doubt in my mind that he will do fantastic, he is prepared now. He grew from this experience and realized that you can learn from your mistakes, you can do better next time, and what doesn’t kill you only makes you stronger and SMARTER. 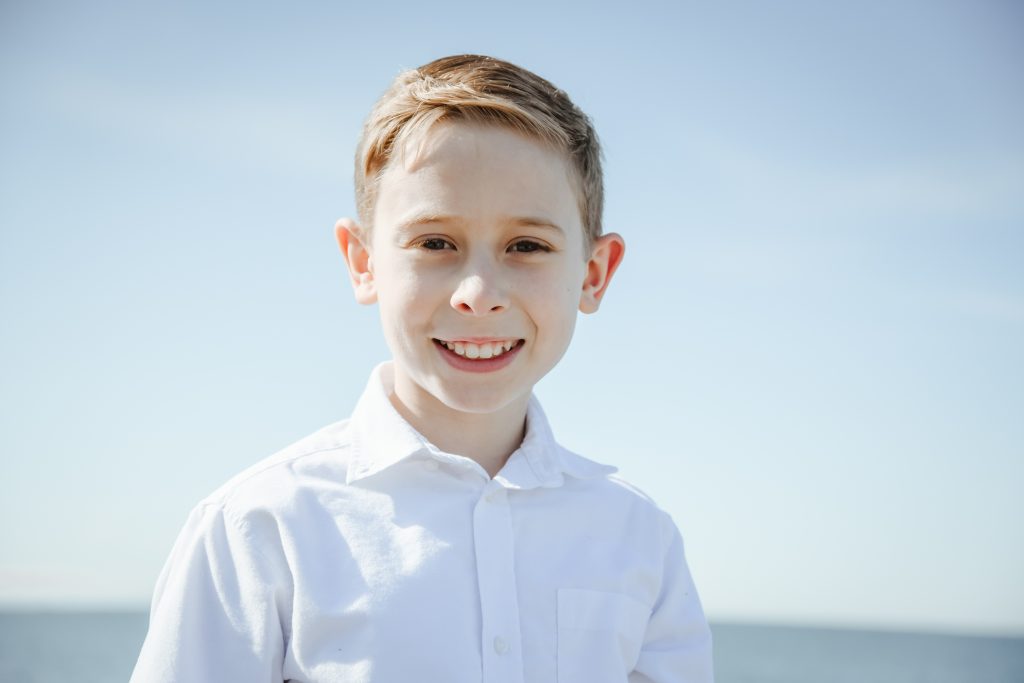 You see, growing pains are a good thing, it means you are growing. Whether it’s physical, emotional or mental growth, it usually hurts, but we get through it and for that we are all better people. 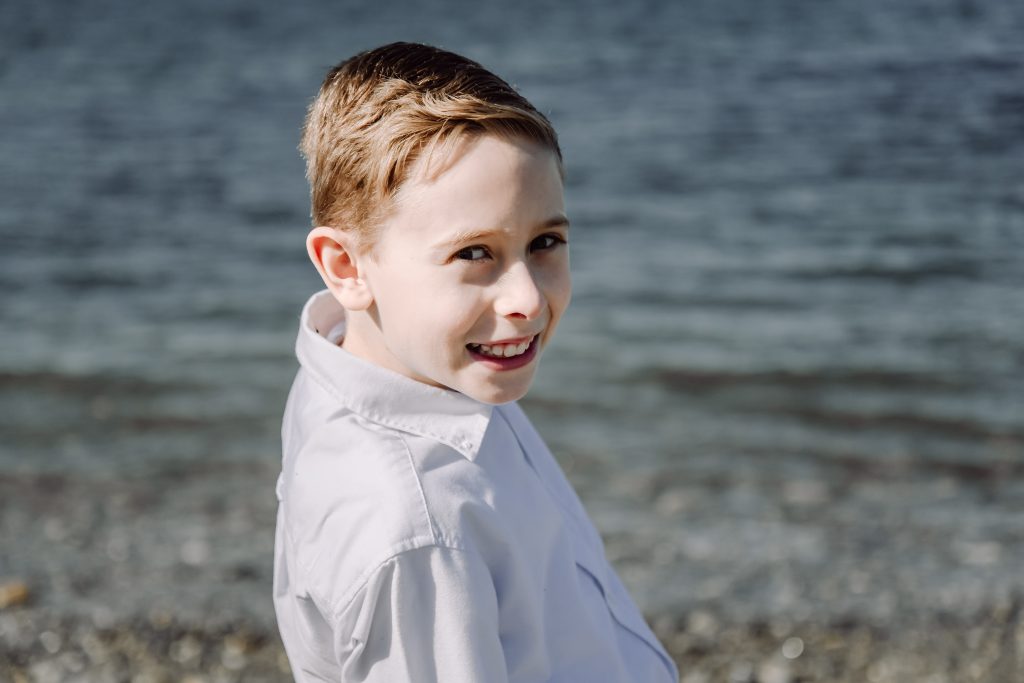 As hard as it was to watch him hurt, and feel like a failure for a little bit, I was happy for him to have the stress and the anxiety of the experience. The lesson he has learned going through all of this will make him a better person, a stronger adult and hopefully, a more prepared and organized one. You can see by his smile that all is well and he is going to continue to perform!

Thanks for reading my blog! I'm looking forward to meeting you

About Gen of Eve Photography

I am dedicated to providing the best photos and the best client-experience.

Are you ready to let Genevieve take your photo session to the next level?

Send me a message

Simply enter your name and contact info, and I will respond shortly. I'm looking forward to meeting you!